Enhancing our kitchens with Thermador for over a century

Ranges, stoves and ovens from Thermador are built like tanks. If you are a PRO Chef or just learning how to cook, Thermador has some of the best cook tops money can buy.Unfortunately, even the best of appliances break. If you live in Charlotte NC area and your thermador range acting up, call us today: (704) 343-6500Thermador has been making the American kitchen more attractive and also more powerful with innovative appliances for over 100 years. From the very start, the brand was known to introduce cutting-edge kitchen appliances that took the cooking experience to the next level. With the introduction of revolutionary devices like first built-in oven and cooktop, first self-cleaning oven, steam and convection and induction technology, Thermador has transformed the heart of the home.

1916 – In the year that Thermador was founded

Kitchens were workrooms without a lot of frills or excesses. Even though the first electric refrigerator had just been introduced, only about 10% of the homes in the country had electricity at all, and those that did only had enough to power their lights, not appliances, too!

So ranges were free-standing metal behemoths that were either wood or coal burning, and some of the newer ones ran on natural gas. These stoves heated the water for the home and provided any hot water that a home had, too. 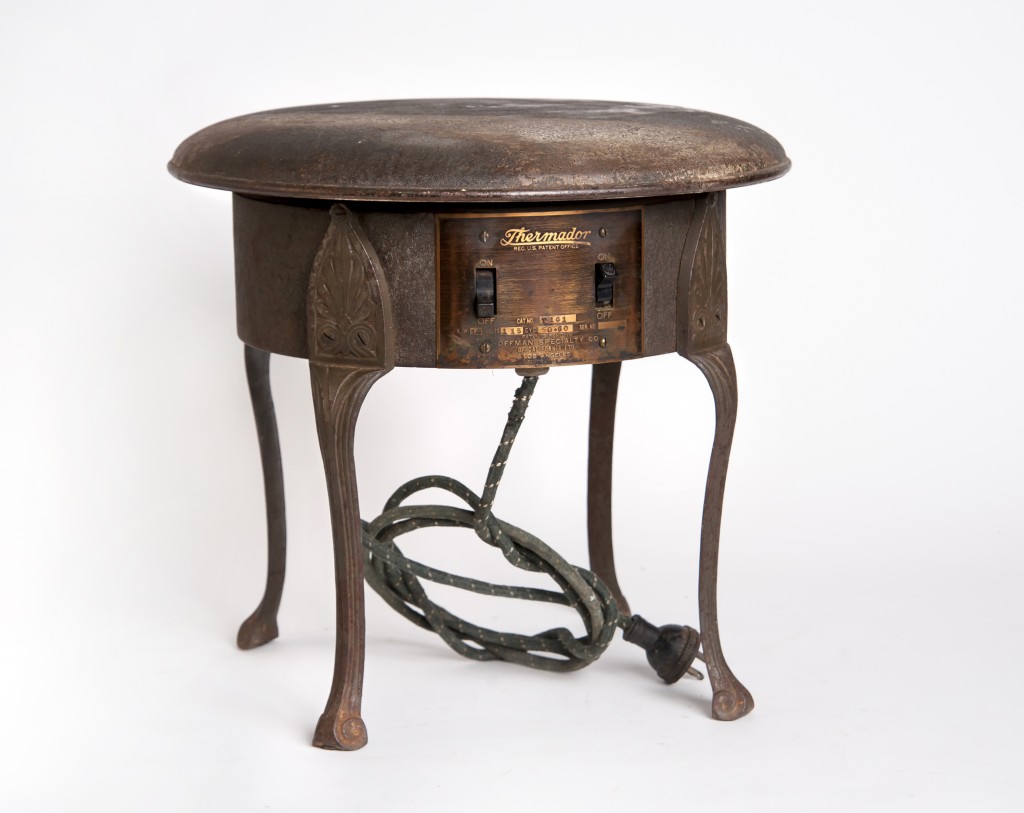 So ranges were free-standing metal behemoths that were either wood or coal burning, and some of the newer ones ran on natural gas. These stoves heated the water for the home and provided any hot water that a home had, too.

Thermador’s focus at this point was on portable and built-in heaters, which must have helped improve the warmth of homes during this time period!

This was the decade that people starting showing a bit more personality in their homes, and in their kitchens. There was more color and style, so appliances weren’t just utilitarian. But there were still very few electric appliances in most homes. 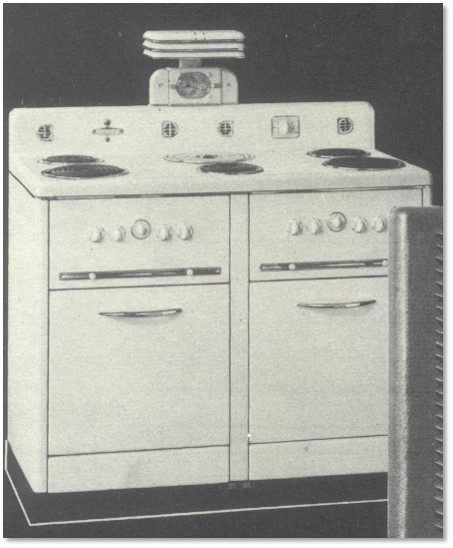 By 1930s, most people in cities and large towns had electricity in their homes, but rural areas didn’t. Electric appliances were becoming more popular, as well as gas ranges and stovetops.

In 1932, Thermador began manufacturing appliances, including built-in models. Until this time, ranges had been treated like furniture and were free-standing, but having new fuel sources like gas or electricity made a big difference in where and how an oven could be placed in a kitchen.

Kitchens were also becoming bigger and often had tables and chairs for breakfast areas, making them transition into the heart of the home.

This was a decade of innovation, mainly due to the new advances in manufacturing and design. Inspiration was found in aerodynamic styling for planes, cars, and trains, and more people were using stainless and chrome in the kitchen.

Gadgets were also key, including automatic timers, gauges, and controls. Thermador was part of this innovative period, introducing the first wall oven in 1947, along with stainless steel appliances. And in 1948, the company also introduced the very first pro range for residential kitchens. 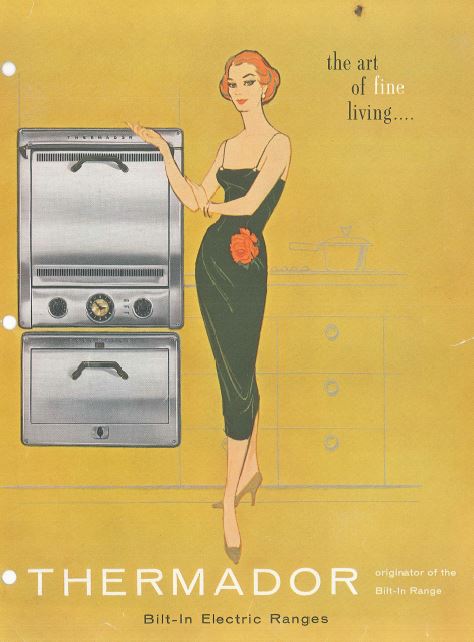 Color was a fun addition to kitchens in the ‘40s, too, including red and white, or blue and yellow to match the fun gingham patterns that became popular around this time.

Refrigerators and freezers became common in kitchens during this decade, with most in white or cream colors. And linoleum was the go-to floor covering for most of these rooms.

Most homeowners began dreaming about during this space age decade, so chrome became the material of choice for a lot of appliances and furnishings in the kitchen. Built-in cabinets were common and they were often painted in bright colors. Linoleum was the top floor covering and Formica was the futuristic choice for the counters.

It was also a decade for eating out and entertaining, mainly due to an improvement in the economy. People began to notice advances and ideas in restaurants that they wanted in their own homes, like the warming drawer that Thermador introduced in 1952. 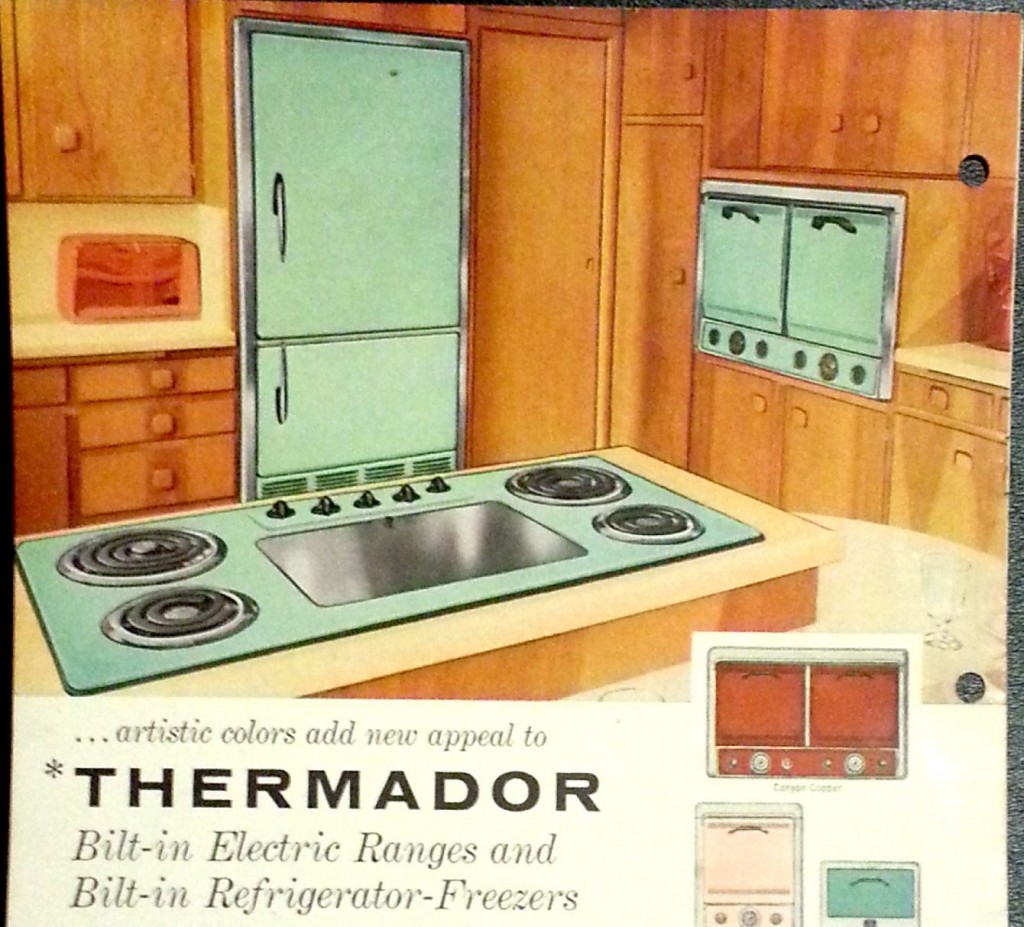 Homeowners were able to provide elegant touches liked warmed plates that were previously only something they would see in a top restaurants.

This decade was all about time savings as more women entered the workplace. Thermador was once again ahead of this trend with its 1963 introduction of its first self-cleaning oven!Dishwashers were becoming much more popular too, although most had to be rolled back and forth from the sink because very few kitchens had built-in space for them yet.Natural wood was the most popular for cabinetry, and appliances still came in a wide range of colors to fit most any decor in the kitchen. 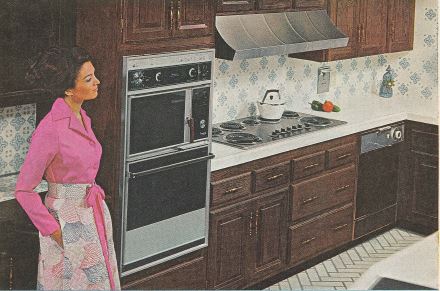 Just like fashions from this decade, kitchens got a little crazy, with odd colors like mustard and avocado taking a turn in cabinets, appliances, and even sinks. It was all about “natural” and earth tones, so kitchens, as a result, were darker. Convenience was still key and by 1975, more microwaves were sold than gas ranges. Thermador made things quick and easy for homeowners, with introductions like its “smooth top” material for cooktops in 1970, developed by Corning.

This was a much more conservative era, in the kitchens and out, so most appliances were back to basics in black, white, and ivory.

Kitchens were becoming less of a “woman’s domain” and more about the family as a whole, so there were more breakfast nooks and gathering places like peninsula islands.

Thermador wasn’t slowing down with its innovations and introductions in the ‘80s. The company introduced a Super Burner in 1982, with high-power burners that had an output of 11,500 BTUs, which was unmatched at the time! And in 1987, Thermador launched its sealed gas burner with an automatic re-ignition.

Open-plan kitchens were all the rage by the ‘90s, particularly those that had islands and butcher-block counters. Appliances were really only black and white, and tile floors were super-popular.Thermador added even more innovation to its offerings with two patented introductions. In 1994, the super-low burner debuted, which cycles the flame on and off to keep the heat low, allowing cooks to melt chocolate or create delicate sauces without scorching!In 1998, Thermador’s iconic Star Burner was introduced, creating greater heat coverage with a perimeter that is 56% bigger than traditional round burners. 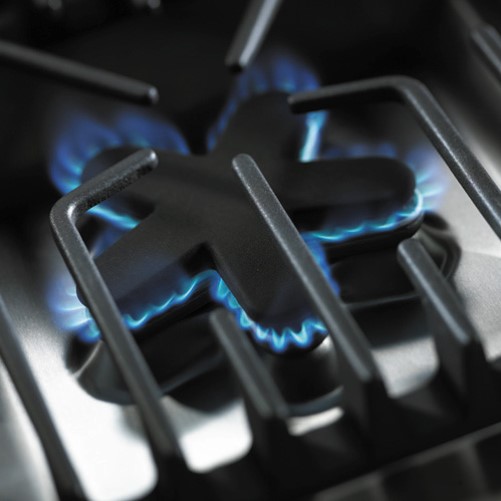 Clean white kitchens were all the rage in this decade, and stainless steel ranges and appliances were just about all you could buy for a new kitchen. Professional grade appliances started to really grow in popularity, particularly larger gas ranges.Thermador was ahead of the curve once again, with this decade showcasing many new innovations from the company, including a Jet Impingement oven in 2002, featuring directed jets of air that sped cooking by 75%. In 2006, Thermador introduced modular refrigeration with its Freedom Collection, a new concept that gives homeowners flexibility and customization in creating food storage solutions.Thermador also launched the first convection warming drawer in 2006, and the largest and most powerful induction cooktop, which also included sensor technology, in 2009. That same year, Thermador’s Sapphire dishwasher also made its debut, with the largest wine glass capacity and its fabulous Sapphire Glow light.

Thanks to the influx of both cooking shows and food delivery services, cooking full and healthy meals is once again the focus of the kitchen. Thermador introduced the innovative Steam and Convection Oven that defrosts, steams, proofs, bakes, slow cooks and even reheats food to perfection! Steam cooking continues to grow in popularity within the American kitchen, as more cooks recognize the health benefits of this type of cooking.From a design perspective, counters can be everything from marble to granite to stainless to wood, and tile backsplashes and wallpaper are back in decor. It’s also all about personalization now, which Thermador spearheaded earlier in the 2000s with its Freedom Collection. And covering appliances with panels that match the cabinetry is on trend.
100 YEARS OF THERMADOR: HOW KITCHEN DESIGN HAS CHANGED THROUGH THE DECADES by Tobi Fairley, (2016/02/24). Retrieved from https://blog.thermador.com/100-years-of-thermador-how-kitchen-design-has-changed-through-the-decades/